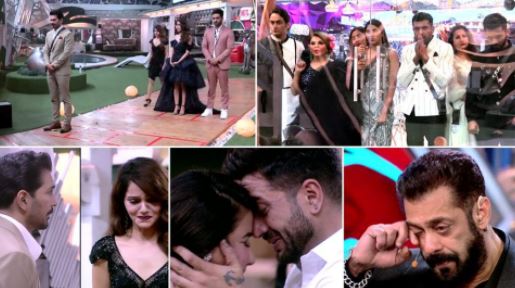 It was an emotional week inside the Bigg Boss 14 house as the contestants got to meet their family members. While Rahul Vaidya, Nikki Tamboli, and Rakhi Sawant met their mothers, Eijaz Khan was visited by his brother Imran Khan. Aly Goni’s sister video called him, and Shilpa Agnihotri boosted Abhinav Shukla’s morale.

Apart from these emotional moments, the viewers got to witness some heated arguments among the housemates. Abhinav Shukla and Rubina Dilaik got into a fight over the latter’s behavior inside the house. Abhinav argued that Rubina cribs over past incidents and is not focusing on making her game stronger. Arshi and Rubina also fought over Rubina’s habit of talking in English. Arshi even broke a chair and was punished by Bigg Boss for the same. Jasmin continued to tell Rakhi that it was Rakhi’s provocation that led to her bad behavior.

This week there was no nomination task since Bigg Boss punished Rubina, Abhinav, Aly, and Jasmin for discussing nominations and nominated them directly. After Jasmin’s exit, the contestants fighting for Bigg Boss 14 trophy include Eijaz, Vikas, Arshi, Rakhi, Rahul, Sonali, Aly, Abhinav, and Rubina.

Salman Khan played the game of “freeze and released” with the four of them. He took the name of one contestant while releasing and that contestant had to walk in the box ahead in their path to the door. In the end, it was between Abhinav Shukla and Jasmin Bhasin. When Salman asked Jasmin to walk out, he was himself teary-eyed. He even apologized to her before asking her to release and revealed that she has been eliminated.

Aly Goni Was Shattered, Got an Asthma Attack

After hearing the elimination results, Aly Goni was shattered. He started crying inconsolably. Aly had a panic attack as Jasmin was about to leave. The latter was emotional too and has asked him to win the trophy for her. Indeed Jasmin’s eviction left everyone shocked too.

The housemates were in denial mode too.

Soon after coming out of the house, Jasmin released a statement on her official social media pages and thanked her fans for the love and support.

“To all you beautiful people, who have stood by me through thick and thin, during this rollercoaster ride of Bigg Boss I just wanna tell you, I absolutely love each and every one of you. I was in tears after I saw all the love and and support my fans have showered me with, on my good days on my good days and even on my bad ones,” she wrote.

“Your love made my journey so much easier. I am truly grateful to have you all in my life I couldn’t have done this without your support. With over 2 million tweets for #BringJasminBhasinBack you guys have proved your strength. I am shocked & but so grateful at the same time,” she added.

“Mai bahar as gayi hun, par Aly abhi bhi andar hai. He might think he is alone but let’s show it to all, that he is not. Let’s all come together to give Aly the love and support to win this thing!! We have to make Aly lift the trophy for #JasLy,” her statement read.

It was a shocking event for everyone as Jasmin was expected to be one of the finalists of this season BB14.