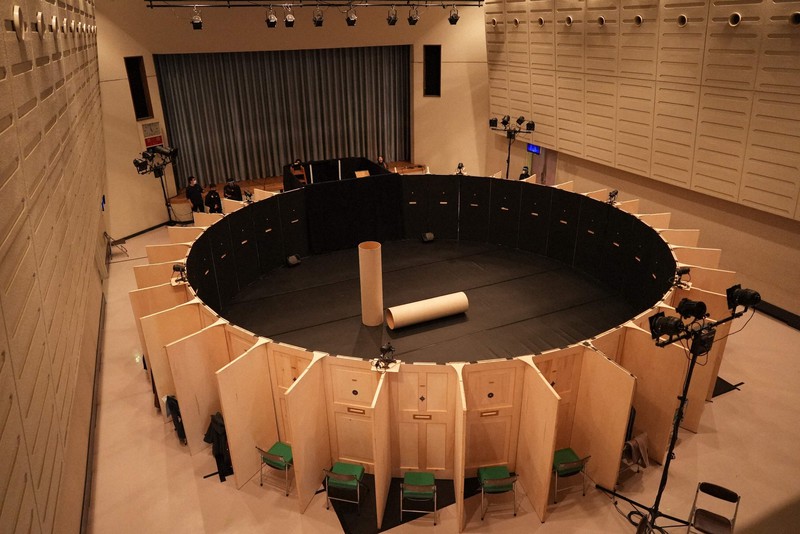 A Japanese dance company Moonlight Mobile Theater has invented a very unique way to make their audience witness the performances while maintaining social distancing. Just how you expect , the lights dim at the start of a theater performance and the audience leans forward to watch the performers dance through a letter box slot provided in front of them.

Moonlight Mobile Theater makes their audience sit on stools that are placed in separate cubicles surrounding the stage in a circular fashion. Each cubicle has its own door with a letter-drop kind of slot through which the audience watches the dancers.

Nobuyoshi Asai, the theater’s artistic director and choreographer explained how limiting the scope of viewers in this setup allows the a more absorbed  and engaged experience.

After cancelling almost every show last year, Moonlight Mobile Theater started using the peephole setup in December. Since they started performing with this novel method, all 12 of the peephole performances have sold out.

Although this new setup has received an overwhelming response but the audience is restricted to 30 people at each show and unfortunately that doesn’t even cover the overall cost of the performance. The performing cost here also includes the additional safety measure such as sanitizing the venue and the subsidies provided by the government barely help the theater group make ends meet.

Mr. Asai pointed out the difficulties as he plans to bank upon the positive response the idea received.

“If we don’t do it, artists will lose opportunities to dance and act. We want to propose this as a model to bring audiences back to theatres,” Mr. Asai said.