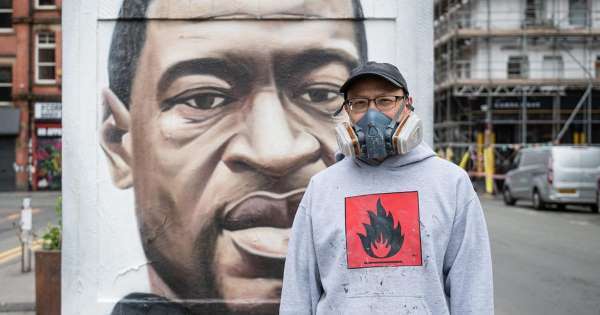 New information has come to light which makes the George Floyd’s murder via the hands of American Police even more gruesome and tragic.

Autopsy results revealed that George Floyd was also diagnosed with COVID-19, and he eventually lived to survive the lethal virus.

But something else took his life in the most shocking way.

Did COVID-19 have a role in his death?

It turns out that George Floyd was diagnosed with Coronavirus in April and he had recovered from it.

Autopsy results show that he was not contagious and there was no risk of him being instrumental in spreading of the infection in any way.

As it has already been established, there were no such health issues which could have caused his death. It was plain and simple the knee of white cop Derek Chauvin pressed on George’s neck for 9 minutes.

Black people are the greatest risk of Coronavirus deaths, but he survived

In most countries of the world which have a black population – the rate of infection and death is much higher among them due to relative poverty which prevents them from accessing the best medical services.

Many surveys have shown that black people are almost 4 times as likely to die of Coronavirus as compared to the white people living in the same community.

The economic divide and lack of access to medical help is real.

George Floyd was able to recover, before he got killed by white supremacy.

Autopsy shows George was badly injured by the police, he had several cuts on his body

Final report of the autopsy also revealed that George had cuts and bruises on his face, head, mouth, arms, shoulders, and legs. All these injuries occurred at the time of the arrest when the police slammed him on the ground and beat him.

Let it be repeated again that George was handcuffed and unarmed, and he was not resisting or fighting back at all – as seen in all the video clips from the scene.

Although the full details of the medical report are shady and show that the doctors are trying to get the cops off the hook for George’s murder and blaming his death on some other circumstances unrelated to a nine-minute long choking with a knee.

Derek Chauvin was arrested, will he be charged?

Although Derek Chauvin has been arrested for murder and other three cops at the scene are arrested for aiding and abetting – justice for black communities in America still seems to be a far cry.

The protests against police brutality continue as Donald Trump keeps hiding in the White House basement. Riot police has now started breaking the Geneva convention, destroying water and food and medical supplies, shooting not just protestors but even bystanders who have nothing to do with the protests.

And most unsurprisingly, USA has the budget to arm every cop with expensive combat gear while the doctors are still fighting against Coronavirus while wearing garbage bags because the government doesn’t have money for their PPEs.

And this is how the cops dress up when their job is not to save lives but beat up people and protect corporate property: