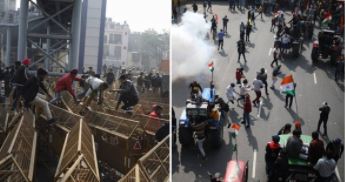 The sight of this year’s Republic Day wasn’t a usual one, nor a peaceful one, and it definitely wasn’t an ethical one. A non-violent protest by farmers turned aggressive and the response to it was brutal.

Ten of thousands of farmers rolled into India’s capital Tuesday on tractors with Indian flags, shadowing a traditional military parade on a national holiday.

They broke through barricades, clashed with police, and occupied the ramparts of the 17th century Red Fort – a tourist attraction and symbol of Indian power. It was one of the biggest protests in New Delhi in living memory, posing a fresh challenge to the Modi government.

Tuesday’s violence happened on Republic Day, a national holiday marking 72 years since India’s post-colonial constitution took effect. The centerpiece of the holiday is a traditional military parade, over which Modi presided.

Farm unions had obtained permits for their tractor brigade, which was supposed to be held after the military parade. But some tractors deviated from the convoy route agreed upon with the government and broke through police barriers early.

Clashes broke out in which some farmers attacked empty buses set up as barricades. Police fired tear gas and water cannons and beat farmers with lathis — bamboo rods used by police in South Asia. Authorities temporarily cut off Internet access in some parts of the capital.

The Delhi Police has registered 22 FIRs so far in connection with the violence that broke out during the farmers’ tractor parade in the national capital leaving over 100 policemen injured, officials said on Wednesday.

The tractor parade on Tuesday that was to highlight the demands of the farmer unions to repeal three new agricultural laws dissolved into anarchy on the streets of the city as tens of thousands of protesters broke through barriers, fought with police, overturned vehicles, and hoisted a religious flag from the ramparts of the iconic Red Fort.

The protesting farmers have also announced a foot march to Parliament on February 1, when the annual Budget is presented, to press for their demands including a repeal of the three new agriculture laws.

BJP MLA Surendra Singh has alleged that violence during the farmers’ tractors parade in the national capital had taken place on the directions of Congress President Sonia Gandhi and Rahul Gandhi, and demanded that a case of sedition be lodged against those involved in the violence.

Hitting back, Uttar Pradesh Congress media coordinator Lalan Kumar charged that the BJP government was responsible for the violence and said the BJP MLA’s statement shows his “mental bankruptcy”.