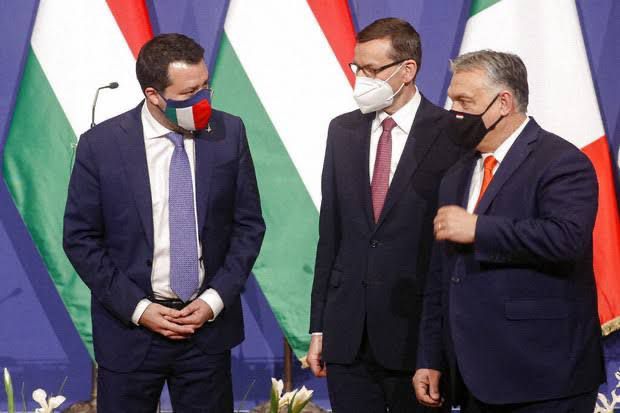 The recently concluded elections in France gave a winning mandate to the incumbent President Emmanuel Macron. Macron, who belongs to the LREM Party with center-right affiliations, secured a victory over Marine Le Pen of the Nationalist rally, a French is far right. Though victorious, the rising vote share of the latter and the close contest entailed in the French elections paints another different picture. Article 7 of the French Constitution states that the elections go to the second round if there has not been any clear majority obtained in the first between the two candidates who received the most votes. Macron secured 66% of the votes against Le Penn’s 33 in 2017, but the margin dropped substantially in 2022. The difference between their vote shares halved. Amongst many narratives that follow, the most concrete is that far-right ideas have gained traction by mainstreaming and not radicalizing, and this holds not only for France but also for Europe in general.

The rise of far-right and nationalist trends could be seen in the recently concluded elections in Hungary, which gave a record 5th mandate to Prime Minister Viktor Orban and his party Fidesz. Orban has been accused of being a self-styled illiberal democrat who combines soft autocracy with crony capitalism. Serbians have re-elected Alexander Vucic,, a populist right-winger,, as their President for the second consecutive term. Poland in 2020 saw President Andrzej Duda – whose one of the objectives was to overhaul a judicial system, which the opposition opposed stating a direct attack on the rule of law by switching to an authoritarian regime- re-elected. Significantly, he garnered more votes from the native Poles than his counterpart. In Northern Ireland, the nationalist party Sinn Fein captured the largest number of seats for the first time since Northern Ireland was founded as a Protestant majority state in 1921. Sinn Fein seeks unification with Ireland and has also been associated with the Irish Republican Army, an Irish militant group trying to take Northern Ireland out of the UK rule.

In the pockets where these trends aren’t in power, their ambit is such that they play an extremely important role. Matteo Salvini – the then minister for interiors of The Lega Nord party in Italy, withdrew support, toppling the Italian government on the issue of illegal immigration from Africa in 2019. Salvini, in an interview, had reportedly stated – “I refuse to think of substituting 10 million Italians with 10 million migrants”. In Bulgaria, the center-rightist GERB party failed to move ahead, unlike in the previous elections but still sits in the ruling faction as part of the coalition. The Social Democrats of Sweden are also pushing for more prominent roles in the parliament on the back of their populist nature, more in line with Finland and Estonia, where far-right parties have been part of governing coalitions. Before the elections, Macron was almost overwhelmed by Le Pen in the predictive polls, showing the surge of rightist-nationalist sentiments across France.

The reasons for such an overwhelming response are plenty. Europe has been the beacon of western-modernization, attracting many people from outside the continent. The overflow of persecuted populations from the middle east and Africa has only made matters worse as substantial demographic changes have taken place. This was majorly noticed in the Greek immigration crisis of 2017, later acknowledged by nations like Germany, France, Italy, and Great Britain within their borders. The period was followed by the COVID-19 pandemic, which further closed the economy and physical interactions, promulgating what can be called ‘reverse globalization’. ‘Euroscepticism’ – a political doctrine advocating disengagement from the European Union has been on the rise with countries looking for more sovereignty and political and economic freedom. This has been duly exploited by not only the right but also the left-wing populist parties. BREXIT of 2020 has strengthened nationalist sentiments across the continent.

One of the very important narratives of these right-wing leaders has been Euroscepticism, the policies of the European Union, the terms of immigration, a common currency, and Brussels interference in the nation’s private affairs. Matteo Salvini has been very open about his disenchantment with the European Union. Hungary’s Orban has also minced no words in calling out the EU in his first post-election address; alongside Serbia also embarking on positions contrary to the EU in the context of buying Russian gas, which has been embargoed in the wake of the Russian invasion of Ukraine. Orban’s relations with China have also been viewed with suspicion. Scholars stated that a FREXIT, similar to the lines of a BREXIT, could have become a possibility had Marine Le Pen been voted to power. She never openly supported this view, but looking at her orientation towards the block, it was sure that she would have weakened the coalition inherently, as France and Germany had been the biggest mainstays of the Union after the withdrawal of Britain.

The recent Russian invasion of Ukraine will challenge the political landscape of Europe. NATO and the EU have been the organizations that have tied Europe in unison relentlessly; the Russian expansionist drive poses serious challenges to this order. The demand for secession of Northern Ireland would be pacing up, and the rise of the right-wing would be demanding reforms in their respective nations. The democratic values have been challenged inside-out, of which Europe had boasted for a long time. America’s alienation from the recent developments in Europe has also not gone well with the speculations amongst the most fervent atmosphere known in the 75 years succeeding the Second World War. The regimes of Belarus and Russia are another big menace. Their arrogance and fabric of governance further spread the nationalist fire, pushing the continent towards a higher degree of autonomy, which Europe, unfortunately, due to its heavy alliance on collective security and integration, will find challenging to deal with. The grounds for the far-right are ripe, and with formidable adversaries like Viktor Orban at the helm, how Europe braces up and comes out unscathed would be something to watch for.