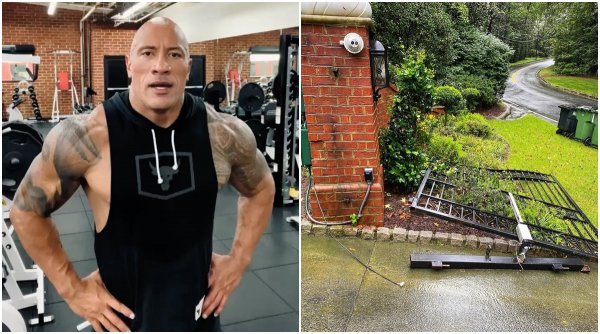 Dwayne Johnson and his entire family were diagnosed with COVID-19 a couple of weeks back, and they recovered recently. But if we know one thing about Dwayne “The Rock” Johnson, it’s that he doesn’t let adversity get him down.

He said that getting COVID-19 was pretty hard on him and his family, but now one of his viral posts has shown that he is as strong as he has ever been.

Why did he even rip off the gate?

He shared a post on Instagram where he showed a ripped metal gate that he broke with his bare hands. He said that he was locked inside his home due to a power outage so he had to wrench the gate open with his hands, removing hinges and everything.

The Rock said that he had to go to work and it was getting late due to the power outage. He didn’t want hundreds of crew members waiting so he eventually brought out his inner “Black Adam.”

“By this time, I know I have hundreds of production crew members waiting for me to come to work so we can start our day. So I did what I had to do. I pushed, pulled and ripped the gate completely off myself. Ripped it completely out of the brick wall, severed the steel hydraulics and threw it on the grass.”

Here is his full statement

Who is Black Adam?

Black Adam is an anti-hero from DC Comics Universe, and Dwayne Johnson will be playing the role of Black Adam very soon. He is currently filming for it, and then the movie will be released by the end of 2021. It will be directed by Jaume Collet-Serra.

Seems like Dwayne Johnson is the perfect cast for this role.

Even his security team was shocked after seeing the broken gate and how easily he had ripped it apart.

“My security team was able to meet the gate technician and welders about an hour later — and they were apparently, “in disbelief and equally scared” as to how I ripped it off Not my finest hour, but I had to go to work. And I’m ? ready to be BLACK ADAM”