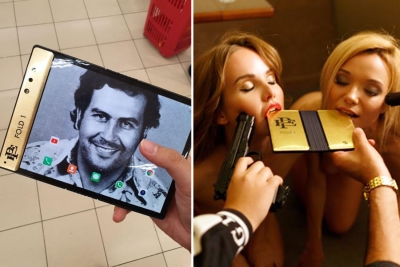 Drug lord Pablo Escobar’s brother has put an open challenge to Apple and Samsung, as he launched a new foldable smartphone. He claims it will be the next greatest thing in the world of technology.

The Fold 1, according to Escobar, comes with extra security to protect you from the Government. It is equipped with a “special security” feature that prevents external bluetooth scanning and restricts government access to your device. It also comes with a thin layer of metal that blocks RFID and other communications.

Pablo Escobar Fold 1 is loaded with Android 9.0, Octacore 2.8 GHz Qualcomm Snapdragon 8 Processor, two 7.8-inch AMOLED screens that are made of a “special type of plastic” that is very difficult to break.

The smartphone is also equipped with a fingerprint scanner, and comes with HD sound, loudspeaker, mic with noise cancellation and other myriad features that are the mainstay of modern-day smartphones.

The first batch of production is planned to shell out about 100,000 phones.

The smartphone, designed in USA and manufactured in Hong Kong – comes in two variants. While the 128GB/6GB variant is priced at $349, the other more ambitious version of 512GB/8GB comes for $499. You can order the phone from anywhere in the world, and it will be shipped for free, says Escobar.

While most people see Fold 1 as a challenger for Samsung Galaxy Fold, Escobar wants to beat Apple at their own game. He said in an interview:

I have told many people that I would beat Apple and I will. I cut the networks and retailers, to sell to customers phones that can fold for only $349, phones which in stores cost thousands of dollars by Samsung and others.

“This is my goal, to beat Apple, and by doing it myself like I always have,” he added.

Roberto Escobar is positively confident about the quality of this new smartphone which he claims is unbreakable and tougher than Samsung Galaxy Fold.

I have made one of the first foldable smartphones in the world. Thanks to effective production and no special deals with retailers, we have been able to keep costs low as compared to other manufacturers.

‘The Escobar Fold 1 is the best smartphone in the world right now.’

The official Escobar smartphone website writes: “Imagine a reality, where you can ease fold your phone into a tablet. This is now possible, thanks for the Escobar Fold 1.”

Their market strategy is.. interesting

You may have heard and seen the models in lingerie and bikini selling cars and motorbikes, but Escobar takes it a level higher with uncensored video advertisements on YouTube and endorsement pictures by models in scanty clothing.

Who is Roberto Escobar?

Roberto Escobar is the brother of deceased drug lord Pablo Escobar, who once was in charge of 80% of the total cocaine that was smuggled into the US, and had died during a police shooting in 1993. Both brothers used to run the drug cartel named Medellin Cartel from Columbia, and Roberto was the co-founder and accountant there. Later, he moved away from crime and started his new path.