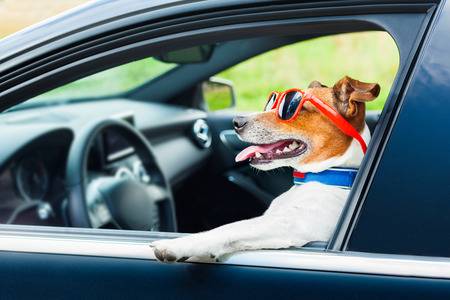 Sunday, the Washington Police in USA were baffled out of their wits when they saw a car rushing at 175 kph on the Interstate 5 highway – with a dog in the driver’s seat!

The car hit two cars in the way, and several people called 911 – and then the police caught the car after a high-speed chase.

When the car stopped, the dog was in the driver’s seat

They arrested a 51-year old man who was in the car, after he claimed that he was “teaching the dog how to drive.”

If that is conclusively proven then the man would be charged for putting the dog’s life in extreme danger, along with endangering the lives of other people driving on the road.

No major injuries happened in both the crashes caused by the car. According to the trooper Heather Axtman who said in an interview to CNN:

“He was driving very erratically. So erratically that multiple people called 911.”

When the troopers chased the car, and tried to corner it – they saw that the dog was sitting in the driver’s seat, and while the man was holding the steering wheel, according to the trooper Heather Axtman.
The authorities have said that the dog was also may have been driving at some point.

Nobody got hurt in this high-speed chase

Later, the man cut from the highway and went into a pedestrian trail and that’s where he got pulled over. Troopers used spike strips to put an end to this dramatic hot pursuit.
Thankfully, there were no pedestrians on the trail at the moment, as Axtman said:

“The fact that there wasn’t anybody on the trail is nothing shy of miraculous. We are very thankful.”

Will the dog be charged with a felony?

It turns out that the dog was in question was a pitbull puppy, and 51-year old man was charged with DUI, reckless driving, hit-and-run, and felony eluding after he said he was “teaching his dog how to drive.”

To which trooper Axtman reacted:

“I wish I could make this up. I’ve been a trooper for almost 12 years and wow, I’ve never heard this excuse. I’ve been in a lot of high speed chases, I’ve stopped a lot of cars, and never have I gotten an excuse that they were teaching their dog how to drive.”

It is not clear yet whether the dog will be charged in this incident. Although, after the owner was arrested, the dog was sent to an animal shelter.