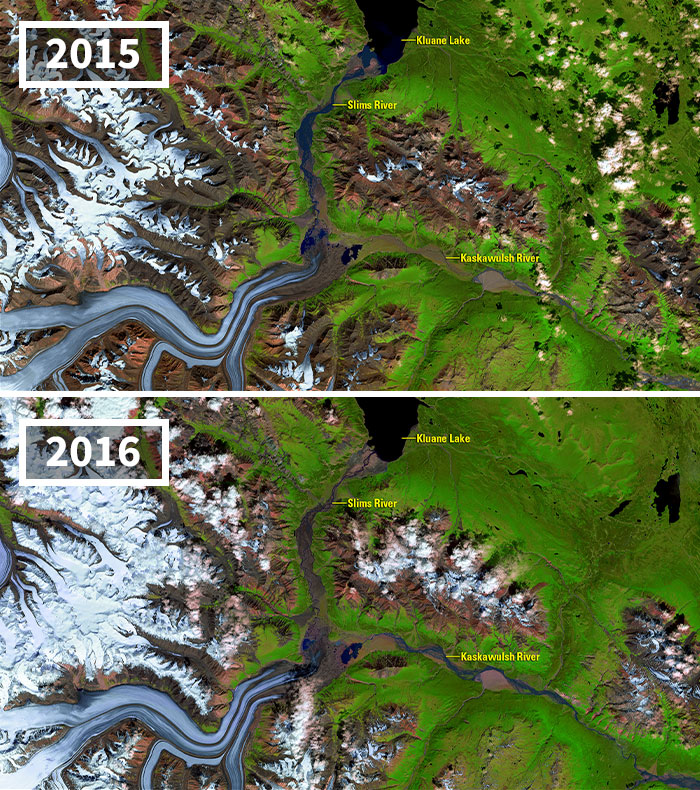 The planet is going immense climate change conditions in pas several years. Icecaps are melting, glaciers are bursting, floods and hurricanes are stronger than ever and earthquakes have become a daily phenomenon. Not only this, various areas are experiencing extreme drought conditions with water resources diminishing every passing day and wildfires have resulted in ruining the biggest green belts across world.

With several organizations and individual researchers across globe keeping a close eye on climate change and its possible instigators, NASA has been the key player.

For this it also created a special space by the name of ‘Images of change‘ website that documents various before and after observations of Earth in terms of grasslands, waterbodies, glaciers, mountains, wildlife, forests, green belts, mining and o-zone.

Take this more as as positive exercise towards working together upon changes as NASA has just come out with a video showcasing the history of temperature increase over the past 140 years, and things aren’t looking so good! Last year has been declared the hottest in history after the 2016.

Here are some of the before-after images by NASA for your better understanding:

The area around Arctic ocean that is usually covered in ice, reaches its lowest point around the month of September. However, its lowest point in the year of 2012, since 1984 appeared to be almost half in ratio. In 2016 it experienced an even more so reduction. With the rate at which the ice caps around Arctic ocean is decreasing, there probably will be no ice left in less than a century NASA scientists claim. 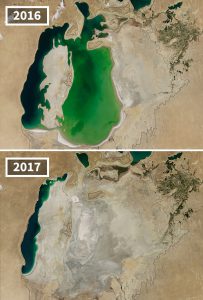 The Aral Sea was once the fourth largest lake in the world until the late 1960s. When the Soviet Union diverted water from the rivers that acted as a tributary to the lake in order to grow cotton and other crops in the arid plains of Kazakhstan, Uzbekistan and Turkmenistan. By the time of 2000, the Northern Aral Sea had separated from the Southern Aral Sea, which itself had split into eastern and western lobes. A dam built in 2005 helped the northern sea recover much of its water level however this was at the expense of the southern sea. Furthermore the dry conditions in 2014 caused the southern sea’s eastern lobe to completely dry up for the first time in modern times. Now it lays almost barren. 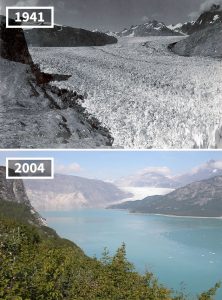 Alaska once known as the glacier land seems to face its existential crisis of own. The two glaciers filled Muir Inlet tributary. In the 2004 photograph, Muir Glacier and Riggs Glacier have thinned substantially. 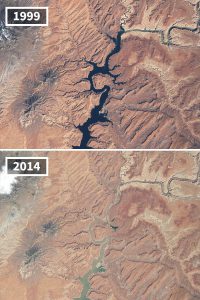 Prolonged drought in the Lake Powell’s water level doubled with water withdrawals have caused a dramatic drop. These images show the northern part of the lake, which is actually a deep, narrow, meandering reservoir that extends from Arizona upstream into southern Utah. The 1999 image shows water levels to almost a full capacity. By May 2014, the lake had dropped down to 42 percent of capacity.

#5 Rare Snow Falls At The Edge Of The Sahara Desert 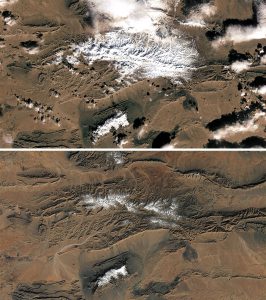 Ever imagined snowfall in a desert? That is true, snow fell in Sahara desert in mid-December in 2016. All of the snow later of which disappeared except only at the highest elevations, as shown in the lower image.
#6 Drying Lake Poopó, Bolivia 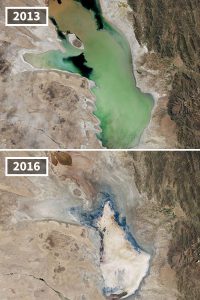 Lake Poopó, Bolivia’s second-largest lake and an important fishing source for local communities around the area, has dried up once again because of drought and diversion of water for activities like mining and agriculture. The last time it dried was in 1994, after which it took several years to replenish. Its not so shallow deapth which 9 feet makes it particularly vulnerable to fluctuations.
#7 Ice Avalanche In Tibet’s Aru Range 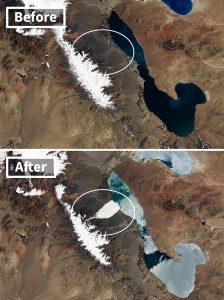 The collapse of a glacier tongue in 2016, sent a huge stream of ice and rock tumbling down a narrow valley in Tibet’s Aru Range. Nine people in the remote village of Dungru were killed along with their herds of 350 sheep and 110 yaks.