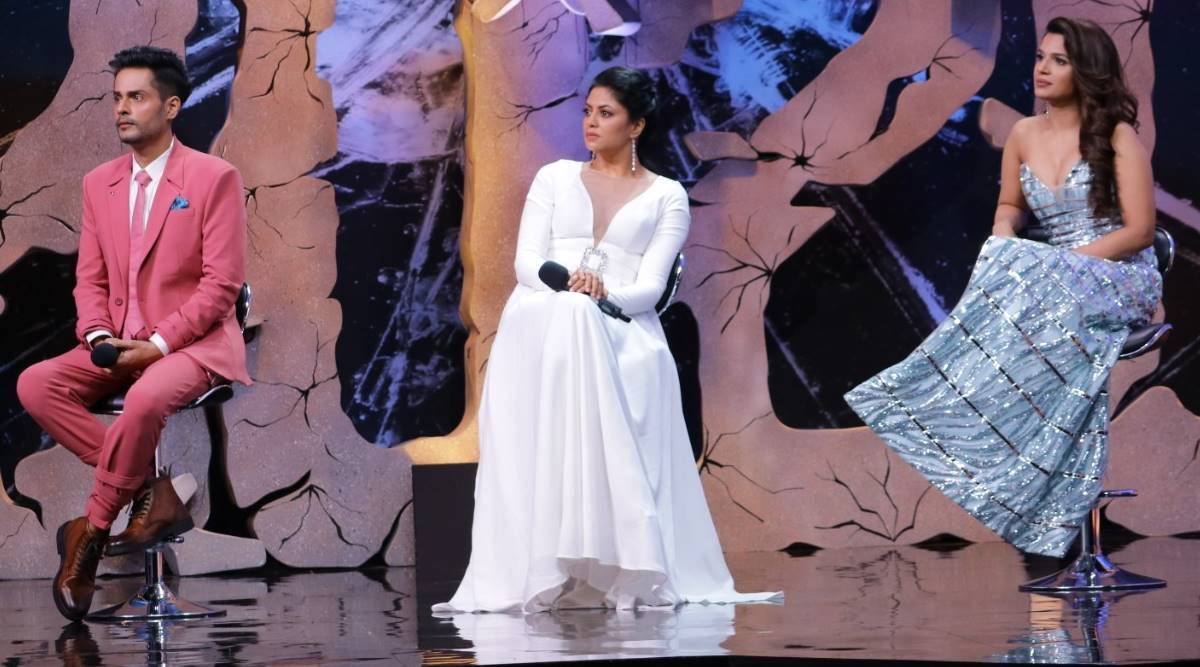 Bigg Boss 14 Weekend Ka Vaar got more interesting with the entry of three new wild card contestants Kavita Kaushik, Shardul Pandit, and Naina Singh. A fresh twist made Kavita Kaushik the captain of the BB house even before she entered the house.

Bigg Boss divided the house into three teams – Gauahar Khan’s team, Hina Khan’s team, and Sidharth Shukla’s team. The contestants picked their mentor and battled against each other to continue their journey in the game show.

Bigg Boss announced that the team which loses the task would have to walk out of the house. At the end of the task, Hina’s team was announced as the winner while Sidharth’s team, which consisted of Nikki Tamboli, Pavitra Punia, and Eijaz Khan, lost. Because Nikki was already selected as the confirmed contestant in the first week, she was safe, but Pavitra and Eijaz had to leave the house along with their mentor Sidharth.

Soon, Hina and Gauahar also bid goodbye to the housemates. Shehzad Deol, who was voted as the ‘Gayab’ member of the house during the Weekend Ka Vaar last week, was also evicted from the house.

Bigg Boss also revealed a new area in the house called the Red Zone. The first inmates of the area were Pavitra Punia and Eijaz Khan. Bigg Boss announced that the Red Zone members will always be at the risk of getting evicted, but they will also get the chance to get back in the Green Zone.

During the week, Rubina Dilaik was also seen complaining to Bigg Boss. In the confession room, she shared that she felt disrespected when host Salman Khan referred to her husband and co-contestant Abhinav Shukla as her ‘personal samaan’. Bigg Boss offered her the chance to leave the show as the team or the host do not intend to disrespect anyone. However, Rubina and Abhinav chose to stay.

The audience also witnessed the first captaincy task, which was being judged by Pavitra Punia and Eijaz Khan. By the end of the task, Nishant Singh Malkani was declared as the captain. However, Nishant’s captaincy lasted just a day because Bigg Boss pointed out that many rules were broken under his captaincy.

Salman Khan welcomed Kavita Kaushik and Naina Singh on the show. When Salman asked who is more confident, Naina pointed out at Kavita. She spoke about her FIR character which was inspired by her father who was a policeman. Slaman said, “Inse behtar lady copy kisi ne nahi kiya hai.”

Naina Singh is quite disappointed with the batch of boys in BB 14 house. She told Salman that she was hoping to find love in the BB house but “Shakal kya dimaag bhi chhor aaye hai. Mujhe lagta hai ladkiyaan zyaada powerful hain.”

Kavita said that contestants are over-prepared and said that Eijaz and Pavitra were re-enacting Sidharth and Asim’s fight. She said, “I thought they will be break into a kiss that would have been more interesting. Naina Singh outperformed Kavita Kaushik in BBQ test. Naina answered six questions while Kavita answered only one.

Salman then welcomed the third guest on the stage – Shardul Pandit. He said he has major Covid anxiety but now he will affect the housemates like Covid-19. He said, “Main unko kag jaaunga. Main unka corona ban jaaunga.” He also shared about being jobless for one and a half years. He had returned to hometown Indore as he was not in the condition to survive in Bombay.

Salman took Shardul Pandit’s BBQ test. He was asked to say which contestant reminds him of which animal if it was Bigg Boss zoo instead of a house. He called Pavitra junglee billee. Jaan seemed like bhawre to him. He called Nikki inchhadhari naagin turned kauwa. He called Abhinav pati and Rubina lomdi as she smart and and clever. He called Jamsin chuhiya. Rahul woodpecker as he pokes where it is not required. Eijaz baaghar billa aka hyena.

Shardul And Naina Lock Horns Before Entering The House

When Salman Khan asked Shardul if he knows the other two wild card contestant. Shardul pointed at Naina and said that she sat on his lap during BCL. For Kavita he said he is a fan. Kavita said that it feels like he will be entertaining in the house as the house is tensed. Naina said she has got an issue with fight with Shardul in the house. She said that it is not called sitting in lap but co-“Mujhe mudda mila gaya ghar jaa ke ladne ke liye. Maine mind kar liye aur ab main aapka dimaag kharaab karungi.”Earlier she was impressed but didn’t like his comment. Salman called it full flirting.

Salman Khan connected Shardul to Karan Patel and Ankita Bhargava via video call. Ankita advised him not to think of himself any less than others. Shardul revealed that he is fortunate to have friends like Karan and Ankita, who helped him during the lockdown. Karan Patel also wished luck to Kavita Kaushik who is also his good friend.

Housemates were given a task where they had to decide which contestant was seen for how many minutes on the show according to mutual decision. However, they could not come to a conclusion. Later, Kavita, Shardul, and Naina also shared their observations. They said Eijaz Khan is seen the most, while Abhinav Shukla, Nishant Malkhani weren’t seen much on the show.

Kavita Kaushik Became The New Captain Of The House

Housemates had to decide who among the three wild card contestants would go in the red zone. Shardul Pandit and Naina Singh got four votes each. As Kavita got only one vote she became the new captain of the house. Kavita thanked Rubina for voting against her. The three wild card contestants got a warm welcome inside the house. Eijaz was cheered to see Kavita in the BB house. Kavita told Eijaz that it looked like he was copying Sidharth Shukla. Eijaz told her about his fights with Rubina. Kavita called Rubina insecure due to which her husband is not being seen on the show. She said that she made a big issue out of salmna’s joke and cried. Eijaz said that she feels her competition is with Bigg Boss. Naina Singh pulled Jaan’s leg for his crush on Nikki Tamboli. Later, Nikki is seen bonding with Rahul Vaidya. She asked him to be double dholki and use it for his advantage.