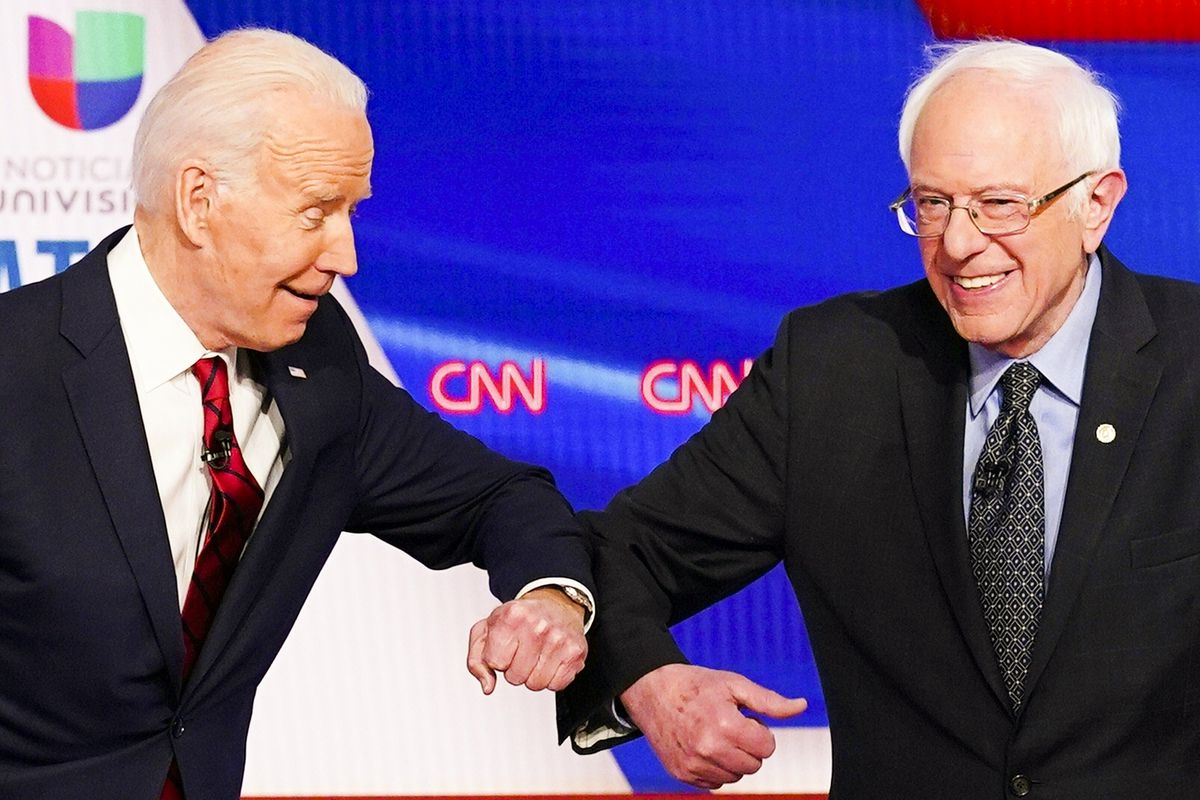 Joe Biden is almost on the cusp of winning the Presidential nomination from the Democratic party – he has 1972 delegates and he needs a total of 1991 to cinch his nomination.

Bernie Sanders, on the other hand, is staying at 1051.

Although, Joe Biden has proven himself to be the lite version of Donald Trump – with his racist policies, misogynist behavior, acts of sexual harassment, and pedophilia – yet common people of America seem to be loving him.

During the George Floyd protests, American police shot several citizens with rubber bullets. Police shot people in the eyes and the head and the neck and in the heart – and many people lost their eyes permanently, some suffered extensive brain damage, some of them died after airway trauma and heart-stroke after being hit by these rubber bullets.

While Bernie Sanders proposed for police reform and assault control, Biden had the “genius idea” when he asked the cops to shoot the people in the leg instead of the heart.

That’s the only idea he had about how to solve the problem of police brutality.

What is Joe Biden’s biggest “gift” to the Black community?

Joe Biden’s first-ever crime against humanity was introducing the infamous “Crime Bill” of 1994 which eventually led to the disproportionate imprisonment of colored minorities such as Black and Brown people.

His law was extremely dangerous when combined with the privatized prison system of America, which essentially runs to extract profit and not to reform the prisoners. Inmates are forced into neo-slavery, and they are forced to work for as little as 23 cents to 95 cents per hour.

This prison system and Biden’s law make it possible for jails to house black people for petty theft of a few dollars and keep them in for years. While most rich white people such as rapist Brock Turner and Utah CEO who raped children – get out of jail in just a few months.

Biden never apologized and still refuses to apologize for this racist law.

Biden has numerous accusations of sexual assaults and sexual harassment against him, about which he denied all culpability. He cursed the reporters and people who believed the women – and bluntly asked them to go vote for someone else.

He has repeatedly touched children inappropriately, even in public – often sniffing them and kissing them without any consent.

His behavior with his granddaughter is nothing short of gross and incestuous where he kisses her on the mouth – and in this way, he might even beat Donald Trump’s creepy obsession with his daughter Ivanka.

Why are Americans voting for him and not for Bernie Sanders?

The simplest reason for American’s preference of Joe Biden over Bernie Sanders was explained by a woman on Trevor Noah’s The Daily Show. She explained the problem of “familiar d**k” – about how women often prefer to go back to their abusive ex-boyfriends rather than moving ahead with someone new and decent.

It’s sort of a Stockholm syndrome mixed in with the fear of uncertainty.

American people are choosing Joe Biden because he’s a creepy old white man who also happens to be a sexist and racist – and he fits in perfectly with all the previous presidents except Barack Obama and Abraham Lincoln. He could be the kind of president America has known for most of its history.

So people would choose him rather than going with Bernie Sanders who is not a racist, not a sexist, and he speaks for the people instead of doing lobbying for the rich.

There is only one way ahead for the Americans

Bernie Sanders may have suspended his campaign but his name still appears on the ballots and that is why you should still vote for him. It will help more of the Bernie delegates get into Parliament and it will lead to better policies which will be pro-people instead of being pro-corporate.

Joe Biden might win the democratic primary but he stands no chance against Trump, because he is just the softer version of the orange dictator.

Also remember that most of the democrats and rich liberals who vote for Biden over Bernie, will actually vote for Trump if they were given a choice between Trump and Bernie.

It’s about time you understand that democrats and republicans are the same, and people need to form a third opinion that actually does something for the people of America.

And when the time comes to choose between Trump and Biden, do not choose the lesser evil. Choose nothing. It will teach the democratic party a lesson for screwing over the people’s candidate Bernie Sanders two times in a row, and they’ll know they can’t pull this stunt anymore.

They’ll have to get a better candidate next time.