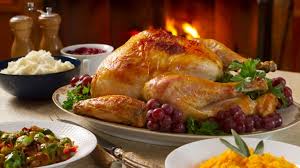 Scroll down to have all of your questions answered!

But before heading towards the list of unique and fun family celebration ideas, let’s get to know the answers to a few frequently asked questions about Thanksgiving aka Turkey Day.

Thanksgiving is celebrated in both the United States and Canada in order to give thanks for an abundant harvest.

In modern days it has become common to give thanks not only for the bountiful harvest, and the food on the table, but also to be grateful for all of the blessings and belongings that we have received throughout the whole year.

Thanksgiving is traditionally celebrated with the most classic Thanksgiving tradition of all, a turkey dinner with all the fixings shared between family, friends, and neighbors.

Thanksgiving is also referred to as “Turkey Day” due to the fact that the traditional Thanksgiving menu features turkey as the main dish.

WHY IS THANKSGIVING A TRADITION?

The first American Thanksgiving meal was a feast that was said to be celebrated by the Pilgrims and the American Indians after the first harvest in the new world in October of 1621. This first Thanksgiving feast was said to last three days and occurred at the Plymouth plantation in Massachusets.

When they arrived in the new world, the pilgrims had trouble growing their own food and suffered from terrible famines and numerous diseases. Many of the first American settlers died as a result.

After the American Indians showed the pilgrims how to grow crops such as corn, they were finally able to harvest their own food. When the pilgrims received the gift of their first harvest, they made a huge Thanksgiving meal to celebrate and thank God for the bounty that they had received.

This first Thanksgiving celebration was not only a way to give thanks to God and the American Indians for their help but also to celebrate the generosity of their first harvest. This first “thanks for giving” harvest celebration has become what we call “Thanksgiving” today.

WHAT ARE THANKSGIVING TRADITIONS?

Thanksgiving Traditions consist of how Thanksgiving is celebrated from household to household. Thanksgiving traditions are thus the rituals, routines, and holiday rhythms that you do with family and friends on, or, around Thanksgiving day.

WHEN IS THANKSGIVING CELEBRATED?

5 Fun Things You Should Try This Thanksgiving

1) Make It A Virtual Potluck

In this difficult time of COVID let’s not put celebrations on hold.

Instead of meeting your family in-person try to cut the turkey together over a zoom call.

Choosing a handful (or even just one!) baked goods recipes to try out for Thanksgiving day has the potential to be both fun and delicious. Plus, baking is a great way to involve younger members of the family and keep them busy throughout the day.

Macy’s Thanksgiving Day Parade is still scheduled to commence this year, Although, it will be modified due to the ongoing COVID-19 pandemic.

So while it might not look exactly the same as it has in years past, you can still turn on the parade first thing in the morning, pour steaming cups of coffee for the whole crew, and eat donuts or bagels while cuddled on the couch. There’s nothing better!

4) Have a Family Photoshoot

Thanksgiving means the holidays are officially just around the corner, and if you’ve got everyone together, why not take the opportunity to snap some family photos for your Christmas card?

You don’t have to hire a professional, just head outside and make use of the timer on your camera or phone.

Taking photos together is a great way to involve everyone, build memories, and get ahead of the game for Christmas presents and cards. Framed photos make great gifts for grandparents.

Last but by no means least, remember to give thanks on Thanksgiving! Gratitude is linked to our emotional and physical health, but it’s also at the root of this holiday. It’s important to stop and consider all of the good and positive things that have happened to us and to say thanks to those who have made them happen.