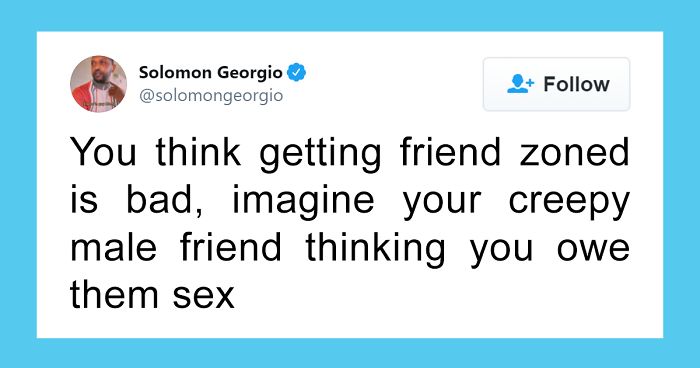 What exactly does ‘friendzoned’ mean? When a person decides that you’re just a friend and no more dating option, you become this complete non-sexual entity in their eyes, like a sibling or simply a lamp.

Some find it funny whereas others find it frustrating. How to feel about it? Well, it’s totally up to you!

However, the following tweets would definitely make you laugh! Read on!

I asked my dog to marry me and he said no. I am stuck in man's best friendzone.

Behind every HD picture of a girl, there is a friendzoned DSLR photographer boy.

I'm so bad with directions that every time I try to go to Pound Town I end up in the Friend Zone.

You call it the Friend Zone. I call it Palcatraz.

Guy asked if I put him in the friend zone. I was like, whoa slow down there. I'll have sex with you, but friendship is a serious commitment.

I don't friend zone people I relationship zone them. You want to be my friend? Too bad, we're dating.

It took Peta two hunger games and a war to escape the friend zone, so maybe y'all shouldn't complain so much.

Most populated places in the world:

"When a girl says 'Awww Thanks!', it means she's politely asking you to return to the friend zone that you just tried to escape from."

what it's like trying to avoid the friendzone pic.twitter.com/mEzd7ubRSE

Life would be simpler if you were notified when you were added to lists IRL.
"Your crush" has added you to list "Friend Zone".