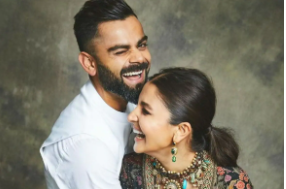 Virat Kohli and Anushka Sharma’s sweet exchange during an IPL match was caught on camera. The video is going viral on social media.

During the Sunday match against Chennai Super Kings Virat and Anushka shared a sweet gesture when Virat did not forget to ask asked mommy-to-be Anushka if she has eaten while he was on the field with his team.

Dressed in an ASOS DESIGN ‘maternity midi tea dress in burnt orange’, Anushka came to cheer for Virat and his team Royal Challengers Bangalore (RCB) in their match against the Chennai Super Kings (CSK) on Sunday. And in the said video, posted on a fan page on Instagram, the two lovebirds can be seen talking to each other through hand gestures.

The video, which is from the ongoing Indian Premier League (IPL) taking place in the UAE, showcases Virat signalling mom-to-be Anushka and asking her if she ate her food. Reacting to this, Anushka can be seen giving a thumbs up to Virat from the stands, to convey that she had consumed her food. Later, in the video, the two can also be seen having a brief conversation through hand gestures.

Meanwhile, recently Virat took to his Instagram handle to treat fans with a beautiful photo of Anushka and himself.

The Indian cricket team skipper shared a picture of his wife and him in the middle of the sea. It was a silhouette of the two against the sunset in front of a monument.

Needless to say, as soon as the photo was uploaded, it went viral and fans have showered immense love on the picture, calling the two ‘relationship goals’.

Earlier this year, in coordinated social media posts, Virat and Anushka announced that they were expecting an addition to their family. Sharing the happy news, the couple, alongside a photo of Anushka dressed in a black dress that featured white polka dots and flaunting her baby bump with Virat standing beside her, captioned the image, “And then, we were three! Arriving Jan 2021.”

Anushka Sharma’s maternity wardrobe is all things stylish, as the actress continues to dish out one chic look after another. Her signature flowing dresses are getting a whole lot of attention. For one of her recent appearances, the expecting mother rocked a romantic red dress. Anushka Sharma completed her OOTD with her usual hoops and a chunky watch.

Cradling her baby bump, Anushka had previously shared an adorable picture on Instagram, which she had captioned, “Nothing is more real and humbling than experiencing the creation of life in you. When this is not in your control then really what is?”

She shared a photo of her in a swimming pool when she wore a black swimsuit on World Gratitude Day.

The mother-to-be posted a sunkissed shot of herself in a white tee and peach dungarees, captioning it “Pocketful of sunshine”. The glow on her face is proof!