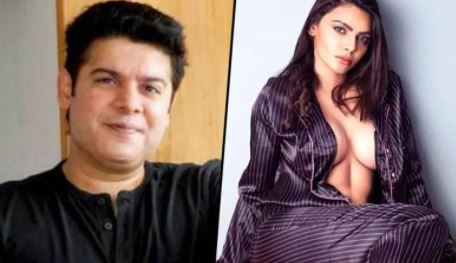 Actress Sherlyn Chopra has allegedly accused filmmaker Sajid Khan of sexual harassment. According to a tweet she posted on 18th of January, the incident happened in 2005, a few days after her father expired.

Bollywood actor-model Sherlyn Chopra took to her Twitter handle and accused filmmaker Sajid Khan of sexual harassment on Monday. In a brief tweet, Chopra recalled her meeting with Sajid Khan in 2005, after the death of the former’s father. As per her tweet, Sajid had asked her ‘to feel’ his privates.

She further added that while refusing Sajid’s demand, she told him that the purpose of her meeting with him was not to feel him up.

Chopra tweeted about the incident alongside a report on allegations made by Jiah Khan’s sister against Sajid Khan. Karishma’s allegations surfaced in a clip from part two of the three-part documentary on Jiah Khan’s death that is currently being aired by the BBC. Jiah Khan died by suicide in 2013. In the clip, Karishma narrated how the filmmaker harassed the actor, saying, “he asked her to take off her top.”

In follow-up tweets, Chopra alleged that Khan is backed by “superstars” of Bollywood who will vouch for his character. “It’s my word against theirs.”

Last year, a model named Paula too had accused director Sajid Khan of sexual misconduct. She took to her Instagram account and penned a note alleging that Khan asked her to strip, to get a role in his film Housefull.

Paula revealed that she was just 17 years old at that time. She wrote, “When #MeToo movement started, a lot of people spoke about Sajid Khan but I did not dare to because like every other actor who has no godfather and had to earn for a family I kept quiet. Now I don’t have my parents with me. I’m earning for myself. I can dare to tell that I have been harassed by Sajid Khan at the age of 17.”

Back in 2018, the Housefull film series director was accused by several women of sexual misconduct. Three women, including actors Saloni Chopra, Rachel White, and journalist Karishma Upadhyay, called out the director and accused him of misconduct with female colleagues on various film sets.

Subsequently, Sajid Khan was replaced by Farhad Samji as the director of Housefull 4.