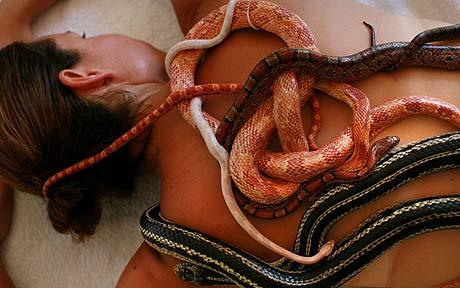 Most people are either terrified or disgusted by snakes – but there are also some people who keep snakes as pets. Now, there is a viral trend rising in which people actually get massaged by snakes.

Snake massage therapists claim that getting a massage by snakes might be miraculously beneficial. This is how:

28 types of snakes will give you the massage

This trend started in Cairo, Egypt where a massage therapist decided to give people free trials for snake massages.

In the massage, oil is rubbed on the back of clients, and then 28 different types of non-venomous snakes and pythons are placed on the back. The snakes wiggle around in the warmth of human skin throughout the session that lasts for 30 minutes.

Snake massage can relieve your emotional and physical pain

Safwat Sedki, the owner of the spa, says that getting massaged by snakes can comfort you from body pain, it can increase your self-confidence, and give you a feeling of complete relaxation.

He also says that it is proven that massage by snakes reduces stress in the muscles and relieves you from joint pain by improving blood circulation. People receiving massages also had higher levels of endorphins released in their body, resulting in a healthier and happier mental state.

“The use of snakes is a type of massage, and it has two aims, physical and emotional. The physical aim is to improve blood circulation and mental stimulation and the emotional aim is that it releases endorphins that help with the ‘happy hormone’ that helps people regain confidence and strengthen the immune system.”

Snake massage is actually a part of history in Asia

Sedki also said that snake massage is not a new thing by any means, and it has been popular in Asia for many centuries. People in many other countries like Brazil, Russia, Congo etc. have also practiced snake massages for a long time.

Initially, he offered these massages for free so that people would try them out. After the word got out and people got interested in snake massages, he has started charging about 100 Egyptian Pounds ($6.37) for one session.

PETA is against the snake massages

While many people are enjoying these snake massages, it’s understandable that this is something that is not for everyone. Also, PETA is declaring that using snakes for massages is unethical and should be stopped.

“Snakes are sensitive living beings who experience fear and stress. They may not display fright and discomfort in the obvious ways that warm-blooded species do — they don’t whine, yelp, or flinch in the way a dog or a mouse might — but constant handling do cause them stress and leave them prone to illness and injury.”