Donald Trump is not holding back now. He is not afraid to show his white supremacist tendencies. While he openly showed Nazi symbols in his Facebook ads which later got banned by Zuckerberg for inciting hate, racism, and violence.

But he is also doing far more problematic things which show how openly racist he is now, and instead of making vague NAZI symbolism, he is now directly showing it.

His rally on the Black Wall Street bombing of Tulsa

Know that, America has been bombed only twice in the entire history. And the first bombing on American land was done by a white mob on the black people of their own country.

Trump had scheduled his Tulsa rally to coincide with the historical event of Black Wall Street Massacre of Tulsa from 1921.

Black Wall Street was a prosperous black community of Tulsa, and it had such a name because they were the wealthiest black communities in the entire USA.

A mob of white people attacked the community in 1921, and killed hundreds of black people, injured thousands, burned down their houses and businesses. They even dropped bombs using private aircraft. The American government allowed it to happen. Black community of Greenwood, Tulsa lost hundreds of millions of dollars while more than 10,000 people were left homeless. Black people could never recover from this damage which is called as the single worst act of racial violence in American history, and the government never compensated them for their loss.

This led to the widening of the economic gap between white and black people in the US. Even now, the average white family is five times richer than an average black family.

Trump’s rally in Tulsa was set during such a sensitive time in the black history, but what he did next is even worse.

His nomination speech on the Ax Handle Saturday massacre of Jacksonville, Florida

Republican Party will nominate Donald Trump as their official candidate for 2020 election in Jacksonville, Florida. They have set the date as June 27th.

Something had happened 60 years ago in Jacksonville, Florida on the same date – June 27th. It is known as the “Ax Handle Saturday.”

This event marks the day when KKK members, ordinary white people, and Jacksonville Police together had chased black people into the streets and beat them to death with baseball bats and axe handles.

Now, the Republican Party is holding a convention dated June 24th-27th, which means Trump will give his acceptance speech on the same date and same place where the historical massacre was done by white people, KKK, and the cops.

His violent and openly racist tweets 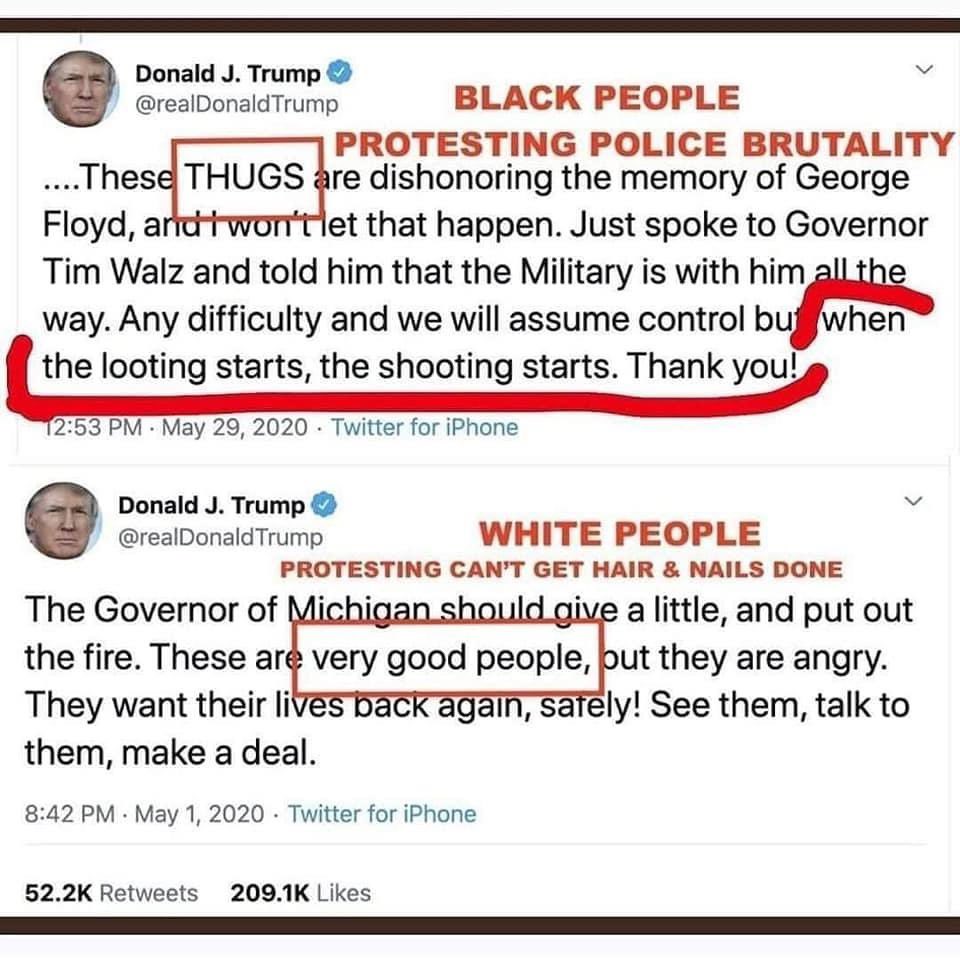 Trump has not failed to show his open hatred for black people. He did it when he called Black protestors as “THUGS” and threatened to shoot them, while he said that the white protestors with weapons whining about haircuts were “very fine people” and they “just wanted their lives back.”

Now his Facebook ads are taken down for containing Nazi symbols such as the inverted triangle, and inciting hatred and violence against people who are protesting against police brutality and racial violence.

“The inverted triangle is practically identical to that used by the Nazi regime to classify political prisoners in concentration camps.”

Official statement by Facebook said: “We removed these posts and ads for violating our policy against organized hate. Our policy prohibits using a banned hate group’s symbol to identify political prisoners without the context that condemns or discusses the symbol.”

So now Trump is at war with social media companies

Now, this will lead to escalated tensions between Donald Trump and social media companies. Earlier, he was pissed at Twitter for marking his tweet as “glorifying violence” and now Facebook has banned his ads to piss him off further.

Nevertheless, Trump is still going to Jacksonville, Florida on the same date and venue of black people’s massacre, and he’ll give his acceptance speech there.