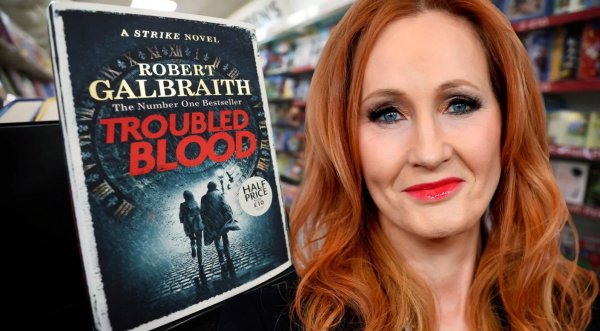 JK Rowling, once an author beloved by everybody, has been digging herself deeper into the mud recently. After a series of misogynistic and transphobic tweets, she was seen sympathizing with Neo-Nazis.

While she has lost most of her fanbase now, she is working hard to acquire a new fanbase from the right-wing of the political spectrum.

Rowling’s new crime novel was just published, and it is already under controversy, due to its utterly transphobic and misogynistic undertones.

What you need to know about the new novel

This novel is called “Troubled Blood” and it is published under Rowling’s pen name Robert Galbraith which is her crime writer pseudonym. This book is the fifth installment in her Cormoran Strike series.

Her new novel features a cross-dressing serial killer – a man who dresses up as a woman to lure his victims and then kills them.

JK Rowling has already expressed her views against transwomen, reinforcing the bias that people shouldn’t trust a “man in a dress.”

Many organizations are coming forward to condemn Rowling

A UK-based charity named Mermaids has said that Rowling’s idea of a person presenting as another gender to carry out murders is a dangerous one and it only harms the transwomen by imposing the already existing stereotypes.

“This is a long-standing and somewhat tired trope, responsible for the demonization of a small group of people, simply hoping to live their lives with dignity.”

Rowling’s obsession and emphasis with transphobia is nothing new. Even her second book in the “Strike” series from 2014 featured a transgender person as a crime suspect and the story revolved around the gender of the trans person rather than the personality – somehow blaming the trans identity.

“We are disappointed to hear that the author might be propagating the same, long-standing and hurtful presentation of trans women as a threat. As a children’s charity, we are bearing witness to the very real hurt felt by young people who once saw Ms. Rowling’s fiction as a place of comfort, friendship and escape.”

Trans people are always the victims of horrific crimes

While JK Rowling is showing trans people as murderers and criminals, data shows that trans people are always the victims of such crimes and rape and murder of trans people has ever been on rise.

“JK Rowling’s new book’s about a ‘transvestite serial killer’ Meanwhile over in the real world the number of trans people killed in Brazil has risen by 70% this past year, young trans women are left to burn in cars and men who kill us (for being trans) are pardoned and sent home.”

Is she the real-life Dolores Umbridge?

Rowling has stressed on her transphobic views and has said that she’ll always stand by it. She even returned her human rights award, after the organization which had given her the award had said that she is diminishing the identity of transgender people.

She even used a troll-like language to attack women, and AFAB people:

“‘People who menstruate.’ I’m sure there used to be a word for those people. Someone help me out. Wumben? Wimpund? Woomud?”

Even the Harry Potter actors such as Daniel Radcliffe, Emma Watson, and Eddie Redmayne had to retort against Rowling, and say that they don’t support her views and that they stand for rights of the trans people.