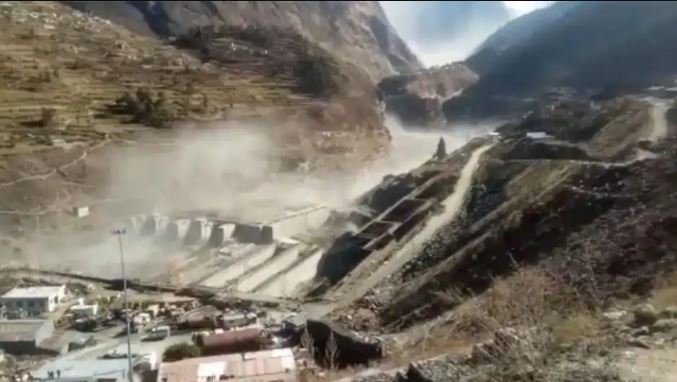 An unfortunate event of 2021 that caused the loss of life and property happened yesterday in the Lands of God. a chunk from Nandadevi glacier broke off in Joshimath in Uttarakhand‘s Chamoli district resulting in flash floods along the Alaknanda River and Dhauliganga River.

The massive glacier break in Uttarakhand’s Chamoli district has killed at least 14. Fifteen people have been rescued in and around the Tapovan project while over 170 are still said to be missing in the avalanche and huge floods. The sudden flood had triggered widespread panic and large-scale devastation in the high mountain areas.

The Damage Caused In The Chamoli District

The damage caused by the glacier break and flood to Uttarakhand’s Tapovan Vishnugad hydropower plant shows the dam has been “completely washed off”, Indian Air Force sources said on Sunday.

Pictures from reconnaissance flights showed the dam, located at the confluence of Dhauliganga and Rishiganga rivers – around 280 km east of state capital Dehradun, destroyed. Two bridges at the entrance of Malari valley and near Tapovan have been washed away as well.

The main road between Joshimath and Tapovan, however, is intact. Construction work and hutments in the valley have been damaged.

“Rubble [was] seen from the entrance of Nanda Devi glacier till as down as Pipalkoti and Chamoli along Dhauliganga and Alaknanda,” Air Force sources mentioned.

Owned by the state-run NTPC Limited, the 520 MW Tapovan hydro-electric project was being constructed at a cost of nearly ? 3,000 crores.

What’s The Cause Of The Glacier Brake?

The breach can be caused by several reasons — in this particular case, for instance, an avalanche was reported in the region two days ago.

But while GLOF is being considered to be the most likely trigger for the event, there are questions surrounding this possibility.

H C Nainwal, a glaciologist at the Hemwati Nandan Bahuguna Garhwal University in Srinagar, Uttarakhand commented on the tragedy. Nainwal said “We don’t know of any big glacial lakes in this region. An avalanche is quite common, and there could have been one, but an avalanche on its own would not result in an increase in the flow of water in the river. The water has to come from a source, and as of now, we do not know what this source is”.

We would have to visit the area to find out what exactly happened. Till then, we can only speculate,” he added.

Argha Banerjee, a glaciologist who works at the Indian Institute of Science Education and Research (IISER), Pune, said it was possible that a glacier lake was present in the area but not known to scientists.

The surprise is also because of timing — a possible reason for the sudden rush of water, like a cloudburst, is not expected at this time of the year. “Cloudburst would be a rare event during this time of the year. It does look like a GLOF event right now,” said Professor A P Dimri from the School of Environmental Sciences at Jawaharlal Nehru University.

The Dehradun-based Wadia Institute of Himalayan Geology is sending two teams of scientists to the area today to study the possible cause of Sunday’s event, said director Kalachand Sain.

Then there are also issues to consider, like climate change or disproportionate construction in a fragile ecosystem, which were supposed to have contributed significantly to the 2013 disaster as well.

As of now, the incident does not seem to have any direct linkage with construction-related activities, or the presence of big dams, but climate change as a factor is not something that can be ignored, particularly in the formation of proglacial lakes. A majority of the glaciers in the Himalayas are known to be receding, all leading to the formation of several proglacial lakes.

British Prime Minister Boris Johnson on Sunday wrote on his official Twitter handle, “My thoughts are with the people of India and rescue workers in Uttarakhand as they respond to devastating flooding from the glacier collapse. The UK stands in solidarity with India and is ready to offer any support needed,” he tweeted.

“France expresses its full solidarity with India, after a glacier burst in the Uttarakhand province, leading to the disappearance of over 100 people. Our thoughts are with them and their families,” said Macron in a tweet. 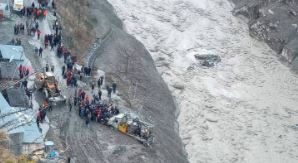 Additionally, Nepal also offered condolences to the families of the victims of a glacial burst in Uttarakhand. In a Twitter post, Nepal’s Ministry of Foreign Affairs said it was saddened by the news of death and missing of many individuals due to the flash floods in Uttarakhand.

The US State Department said: “Our deepest condolences to those affected by the glacier burst and landslide in India. We grieve with the family and friends of the deceased and extend our hopes for a speedy and full recovery for the injured.”

Devastating news for India and Prime Minister Narendra Modi following flash flooding in Uttarakhand. Australia stands with one of its closest friends at this very difficult time,” he tweeted.

Uttarakhand Chief Minister Trivendra Singh Rawat has announced an ex-gratia of Rs 4 lakh each to the kin of those who lost their lives due to the glacial burst. He added that the government has all the needed assistance to handle the situation for now.