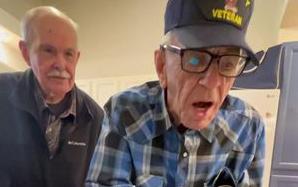 The Internet is full of all kinds of stuff, however, we mostly prefer watching funny and cute posts and videos.

Kenneth “Kenny” Jary, @patriotickenny is an 80-year-old U.S. Navy veteran who has amassed over 1.8 million followers on his TikTok handle by raising awareness for veterans like him around the world.

Besides creating informational videos, Kenny also likes to share his experiences with new technology, and this time it was his encounter with Amazon’s Alexa.

With the help of his friend, Amanda, Kenny tried his hands on Alexa. The video garnered over 21.5 million views. It would be an understatement if we claim it to be the funniest thing you’d see today.

“Can I ask her?” Kenny asked Amanda, as he came close to the device.

Once he got the green flag from Amanda, Kenny made his first attempt to communicate with Alexa

After a short pause, Kenny continued, “no answer.”

But that didn’t crush his spirits, and he tried again.

Following Alexa’s reply, he asked her: “Alexa, how about sausage and pepperoni pizzas. Are they good for you, or not?”

Unfortunately, Alexa didn’t quite get what Kenny was asking for, and she added sausage to his shopping list, leaving Kenny amazed.

However, after Kenny’s another go, Alexa cleared it, to which he responded “thank you.”

Her response left Kenny baffled as he realized Alexa can understand and respond to him.

The video received more than 3.6 million likes and 22,000 comments from people who found it heartwarming.

One viewer said: “OMG BUT PLSSSS LOOK AT THE OTHER GRANDPA. He’s so excited toooooo.”

“He’s asking the real questions tho,” said another.

Even Amazon joined the party and commented: “You’re never too old to make a new bestie, literally!”