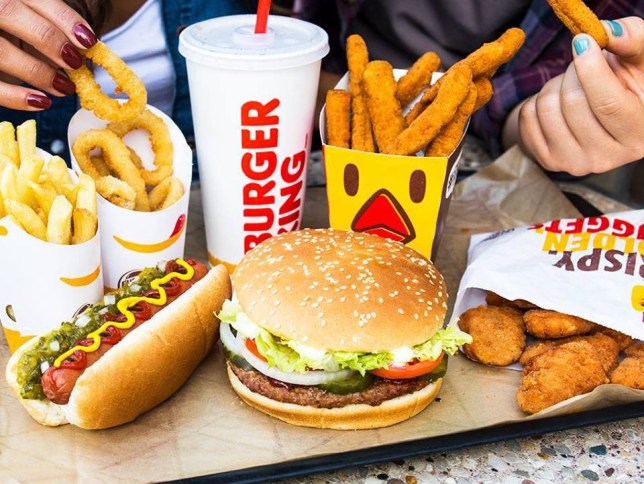 Burger King, next to always being famous for its whopper, has also always been popular for its advertising skills and genuine opacity to putting forward what it originally is. A while ago, Burger King was extremely appreciated as well criticized for its ‘Moldy Burger’ advertisement which proved their burgers do not use artificial preservatives and develop fungus in the most natural way possible. Isn’t that an interesting form of marketing a feature?
Burger King has always abided by staying true to the situations and its food. With pandemic hitting the world, all FnB chains suffered a lot. Every venture has experienced massive losses and unemployment. But in a shock move, Burger King is now asking people to go and eat at McDonald’s – and its reason for doing so is truly heartwarming.

In a statement online, Burger King wrote: “Order from McDonald’s.

“In short: from any of our sister food chains (fast or not fast).

“We never thought we’d be asking you to do this, but restaurants employing thousands of staff really need your support at the moment

“So if you want to help, keep treating yourself to tasty meals through home delivery, takeaway or drive thru.

“Getting a Whopper is always best, but ordering a Big Mac is also not such a bad thing.” 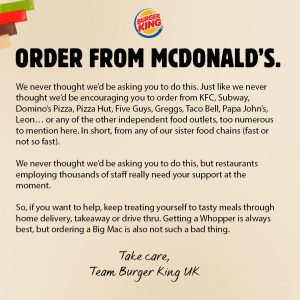 They did so to support other chains and outlets during the second lockdown imposed in the country. Keeping in mind the restrictions coming their way from November 5, Burger King appealed to its customers to help out other sister chains by ordering from them.

Seeing the post, people couldn’t help but react to it. While some supported this gesture.