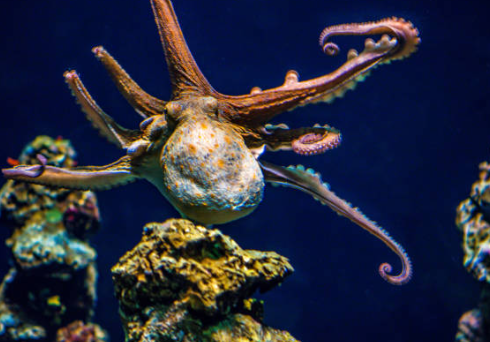 The octopus is a marine mollusk and a member of the class Cephalopoda, more commonly called cephalopods. Cephalopoda means “head foot” in Greek, and in this class of organisms, the head and feet are merged. A ring of eight equally long arms surrounds the head. They use their arms to “walk” on the seafloor.

1) Octopuses are way old. The oldest known octopus fossil belongs to an animal that lived some 296 million years ago, during the Carboniferous period. 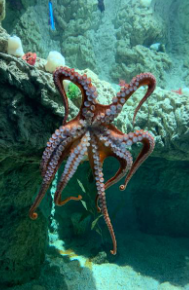 2) Octopuses have three hearts. Two of the hearts work exclusively to move blood beyond the animal’s gills, while the third keeps circulation flowing for the organs. The organ heart stops beating when the octopus swims, explaining the species’ penchant for crawling rather than swimming, which exhausts them. 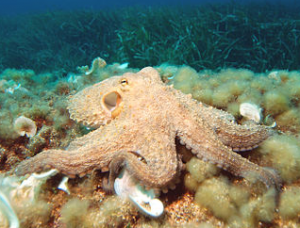 3) The plural of octopus is octopuses. The word “octopus” comes from the Greek, októpus, meaning “eight foot.” 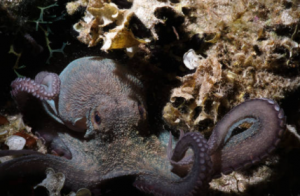 4) Octopus arms have a mind of their own. Two-thirds of an octopus’ neurons reside in its arms, not its head. As a result, the arms can problem solve how to open a shellfish while their owners are busy doing something else, like checking out a cave for more edible goodies. 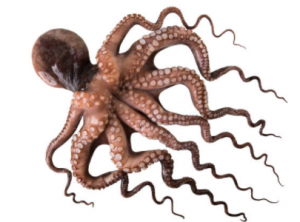 5) After mating, it’s game over for octopuses. Mating and parenthood are brief affairs for octopuses, who die shortly after. The species practices external fertilization. Multiple males either insert their spermatophores directly into a tubular funnel that the female uses to breathe, or else literally hand her the sperm, which she always accepts with one of her right arms (researchers do not know why). Afterward, males wander off to die. As for the females, they can lay up to 400,000 eggs, which they obsessively guard and tend to. 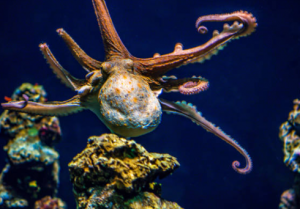