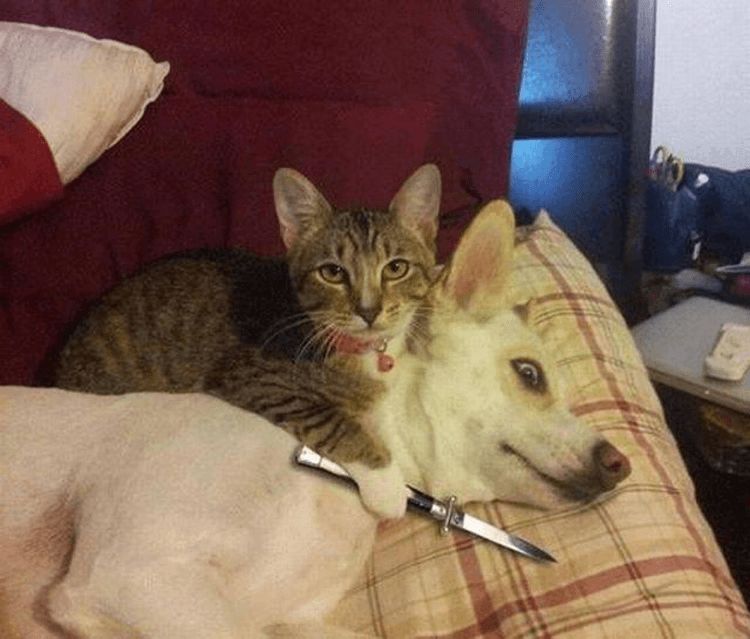 While some animals are adorable, some can be spooky, while others can be downright creepy. Consider your house cat, who is adorable as hell but can also be sometimes quite spooky. But then there are some reptiles who can terrify you out of your wits, you’ll see them further in the list.

#1. Possessed by the Antichrist

Cats are considered the spawn of Satan, and now this cat is already ascended – see the green lights. Also, the inverted cross tells you everything you need to know. Get out of this room as fast as you can.

#2. Do you have a minute to talk about out Lord and Saviour Godzilla?

This monitor lizard was found climbing this iron gate. Imagine thinking you are safe inside your house after setting up a huge ass gate. You should know that it doesn’t matter. Godzilla’s minions will always find a way.

#3. Cat opening a portal to hell

Did you know that the rug in your living room was covering a portal to hell that your cat opened? Your often takes a round trip to hell after you fall asleep.

#4. Looks like all of them are about to levitate any moment now

Goat army has ascended from hell. They have the devil in their eyes. We don’t want to discuss the fate of the photographer here.

It’s only a matter of time before the crows figure out how to operate a chainsaw, and then it’s Armageddon for all humanity.

The doggo’s face says it all: He did not see this coming. He thought the catto was his friend.

#8. Revenge of the Doggo

One of the descendants of the doggo in previous picture, has returned to take revenge on the evil feline. Will he succeed?

They look innocent, don’t they? Looks can always fool us.

#10. Meerkats in a Round Table Conference

What are they planning? I bet this council will lead to the murder of Julius Caesar, I mean I can see Brutus in the huddle.

#11. Further proof that cats are fluid

Say whatever you want about cats. Look at this picture and call them a satanic fluid, but you can’t deny these 12 reasons that cats are literally the best animals ever.

Famously known as the Roger the Ripped Kangaroo, he was the meme king from the world down under. Why are the kangaroos called Tyrannosaurus Deer? Here is a list of funny alternate names for many such animals.

Four-horned goats are the ultimate spawns of Satan. And they have been on Earth for a long, long time.

A descendant of Jabba the Hutt, isn’t he? Only that he is actually ripped, and really pissed.