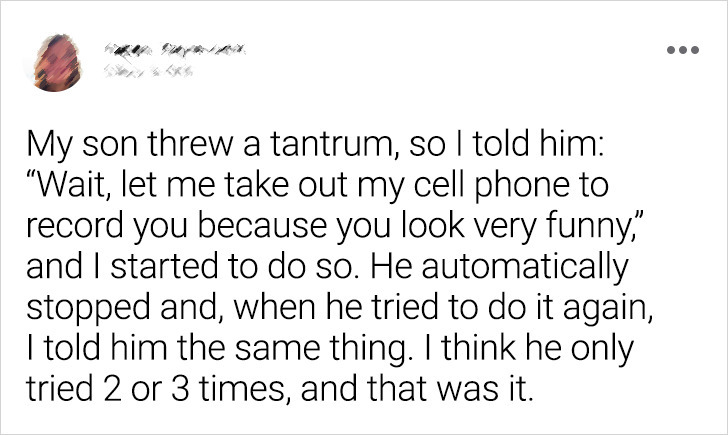 Parenting is not easy. It’s not always about the fun and entertainment. While watching a child grow is one of the most blissful feelings parents talk about, one cannot dismiss how they also have to deal with a child’s tantrums. More often than not, no matter how hard a parent would try to ensure their child picks up the best of the family values and discipline, children to lose it at times. They are unable to make the best choice between right and wrong, and they could end up throwing a tantrum. The reasons could be many- maybe they’re not getting much of what they want but more of what a parent wants to give, maybe they’ve seen tantrums work on television, or have seen other kids try the same.

No matter the reason, dealing with a child’s tantrum in that moment, and amicably is most important.

1. My son once threw a tantrum at me in the doorway of the house when we were going for a walk with his aunt, uncle, and cousin. I told the others to leave because we weren’t going out. I took him up to the house, and we stayed in. He never misbehaved like that again. © Mari Carmen Gómez Español / Facebook

2. I don’t have children, but when I see a kid making a scene, I approach the mom (making sure that the boy or girl sees me) and ask her if she will give me the child who is throwing the tantrum because I collect them. The moms play along and say yes. Automatically, the children get up quietly and obey their mother! It’s a lot of fun. © Elsy Ausencias / Facebook

4. When my son threw a tantrum, I started clapping my hands and encouraging him to do it even louder. Everyone started looking at me. I don’t know where I read that it worked, and it did. Kids want to get attention, and if they see the opposite happening, you throw them off guard. © Angeles Delicado / Facebook

6. Always before going out somewhere, I would explain to my son where we were going, what we were going to do and whether or not I had enough money to buy him something. I would tell him that it was an outing for both of us to enjoy, even if it was just to run some errand. If I didn’t have money to buy him something, I would take him to the playground for just 5 minutes, and it always worked. Talk, talk, and talk with them, that’s the key! © Cynthia Crespo / Facebook

7. My nephew threw a tantrum when he was 2 years old. I just stayed calm, knelt down so he would listen to me, and explained that he was such a good boy, so I didn’t understand why he was behaving like that. I continued saying that he was not like those children who misbehave. He got up, I wiped his tears, thanked him, and kissed him. He is the cutest little boy in the world, so it wasn’t hard to make him understand. © Araceli Cobos / Facebook

8. My son threw a tantrum in the store when he was 2 years old. He wanted a toy, so he started kicking and then threw himself on the floor. He wouldn’t calm down. I grabbed him tightly by the hand, left everything as it was, and walked home (it was only 2 blocks away). The next 3 or 4 times I went to the store, I told him, “I’m going to the store, but you’re staying for whining.” When I finally took him back, he was the best-behaved child in the store. © Mirna Castillo / Facebook

10. My youngest daughter was 5 years old — she is now 31,— and she threw a giant tantrum. She said, “If you don’t buy me what I want, I won’t shut up and will stay here on the floor.” I sat down next to her and threw the same tantrum.
Then she looked at me and whispered, “Mommy, people are looking at you.” And I replied, “If you stand up and be quiet, I will do the same.” She looked at me and said, “You can get me that toy some other time,” and we went home. On the way there, she said to me, “Mommy, you are so childish.” I still am. © Flor Herrera Opazo / Facebook